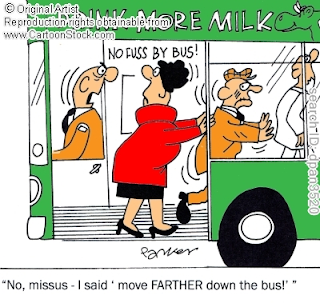 The other day I took a bus into the Bay. It was the first bus I'd been on since we bought the car so, maybe it has been at least ten years since we were without transport.  Even then we would eschew public transport, preferring to walk to the end of the road and then down the Downs along the seafront and into town that way. Of course we were both ten years younger then and the short mile was nothing to us [although laden with shopping we would always taxi back up the hill]

Now the car is gone; not too lamented when we count the money saved and bask in eco. glory of a little less pollution,but  there are times when we have to go to town and this was one of them. I couldn't ask NOAOson, who takes us to our weekly big shop out of town as his plate was overflowing at the time and I needed to browse the Charity shops-not a necessary journey but I needed my fix.

So there I was, waiting for the  10-10 bus. It was late and I was reassured to see there was another elderly woman waiting with me.
A small single decker arrived and I followed the woman inside, flashing my bus pass at the driver. He tutted, took the card and shoved it upside down over the thingummy plate and I moved inside and wedged myself in the only free seat on the sideways bench next to a very fat, beautifully made up lady of an age between 18 and 80.

The air was redolent of talcum powder, Ralgex, Lavender water, Christmas gifts of Givenchy Gentleman, my own [thankfully liberally applied ] Mitsouko, and a faint but definite whiff of Eau de Urine.

From my sideways bench I could see down the bus and every seat was occupied by a Senior Citizen with heads bearing every shade of hair from snow white to iron grey, with some bluish and pinky horrors to season the pot. But the most surprising thing-used as I was to the silence of a London bus, where the journey is a trial to be undertaken with as much speed and anonymity as possible lest one is made visible to the drunk, noisy and potentially violent-here there was a raucous cacophony of sound composed of conversations carried across the aisle, much laughter, and in one instance, singing by two couples along the back seat.

'Donald wanted a chop but at those prices I said it's mince or nothing.'

I  alighted  at the top of the High Street, thanking the surly driver who grunted and swished the door shut before I'd hit the pavement.

Now I'm trying to decide on a collective noun for a clutch of OAP's-and as it includes myself it has to be a good one, flatteringly descriptive of our Joi de vivre.

How about: A Survival of Seniors:
Posted by Moannie at 06:37

Email ThisBlogThis!Share to TwitterShare to FacebookShare to Pinterest
Labels: The wheels on the bus go round and round.