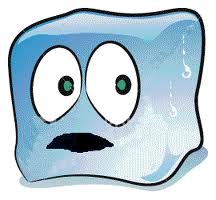 I'm cold! Cold to my bones.   I'm wearing thick leggings, socks and my forever Uggs and above the waist three layers,consisting of thermal vest, Cashmere polo and a huge red, yellow and blue Penguin double/double thick knit that I dug out from the bottom drawer and which  made only the briefest of appearances last year.
This has been the coldest winter in eighty years and I will not be surprised - when the people who spend their lives working out these things - tell us that it has also been the grey-est.  So low and grey have been the clouds, and so full of nasty freezing rain, that the fire doesn't draw, filling the room with smoke and fumes - obliging us to open a window - rather negating the point of a fire. En plus de ca my resident Frog always leaves a door open after he has exited into the kitchen [where the wall fire is only turned on when we are in it] or when, as he seems to do every five minutes, asks the dog if he wants to 'chase le chat? ' not a euphemism , Milou definitely does have a hate of next doors midnight black cat, the chief suspect killer of the dead birds we find occasionally. Or perhaps Milou might want to 'pipi?' or simply have a bark at anyone who dares to walk on the pavement on the other side of the hedge. For whatever reason, JP will open the door from the sitting room and hold it gaping wide  as he opens the door into the freezing garden to let the dog out [he probably was simply asking, in his canine way, for his supper, or a scratch, or perhaps was thinking 'Why are you here?']
The point is that it is he, JP, guardian of the purse, who seldom feels the cold, who surreptitiously turns off the radiators the moment a ray of sunshine pierces the gloom, who curses every time he has to clear out the dead ash, cut the wood, replenish the log basket and bring in the coal -he it is who leaves bloody doors open - letting out the heat which is costing an arm and a leg to slightly [it is a big space] warm  up the room.
Of course I complain, or else I shiver dramatically and sigh, moving him to drape a blanket over me, wrap another scarf around my neck, or, more likely, simply tell me to get up and move about...though not in those exact words.

Now I am a 'have it today and damn tomorrow' kind of girl, er, woman.  This cold spell cannot last much longer, can it? So we will be over budget on heating this winter...so what? We will save on something else, his cheese, for instance or the French bread that costs an arm and a leg.  He counters with 'Your cigs?'


I swear that if, when warmer weather finally does arrive,  I will not once complain about the heat, nor will I ever moan again about the wretched fly, the one that I cannot catch, that buzzes around the room the entire summer, mocking me.