It's good to share, we all know that don't we?  'Share your toys, darling...be nice' our mothers plead.  We share our space, scrunching up on benches, 'Sit here, there's plenty of room' we say as elbows dig into our ribs and mounds of flesh overlap and get caught beneath our thighs. Our Government shares our taxes with despots and good, altruistic millionaires share their wealth, sometimes without fanfare.

So sharing is, on the whole, good.

I learned the hard way all about sharing.

At St. Edith's, the orphanage where I spent five long years, my brother Mick and I were the only children with a parent. Mum seldom came to see us. She remembers it differently, says that she came once a month. Uh uh!
She came once with Jan, the Norwegian Merchant Seaman, once with a tall well padded man who brought me a red child's handbag, once when she took us to a Pantomime of Cinderella, once in the summer when we climbed on the rocks and found an old empty tin of Heinz Baked Beans and she screamed at us, because, apparently it was well known that the Germans left bombs lying around disguised as beans. And another time when I had Mumps. And, of course, there was the time she bought the awful Harry. 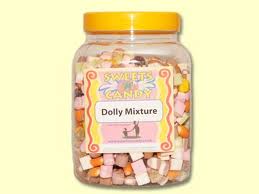 I cannot remember who she brought with her when we got the Dolly Mixtures. More than likely they were a gift from a 'prospective daddy'. These tiny sugary  delights, in individual kid's size jars would have been unobtainable in war - torn, rationed England; they would have been  carefully measured out from a large jar and weighed to a strict 2oz measure of  the weekly allowance. Tipped into a paper bag and the top tightly twisted, they could, at least in my brother's case, last a week. Mine would be gone in a mouthful or two of sweet heaven.

I arrived back at the Convent clutching my Dolly Mixtures and, after changing out of my 'best' coat and dress into everyday hand-me-down skirt and Jersey [as we then called our 'sweaters'] I sat down and opened the jar.
About to put the first sweet-scented rose-pink square into my drooling mouth I became aware of the cessation of all noise and looked up to see ten pairs of eyes staring at the jar in my lap, well, eleven pairs if you count Sister's.
Sister Edith was a stern woman, perhaps she was old, she would have seemed so to me, at six years old. I might have fared better had it been one of the novices but no, it was Sister Edith.

'Do you not think it is Christian to share your good fortune, Molly?' She rose from her chair and towered over me. 'Of course you do...come girls...arranged your chairs in a circle and Molly will divide her bounty as Jesus shared his.'

There was a scraping of chairs on the floorboards as the girls did her bidding. They sat down, their palms upwards on their laps. Pink palms, white palms, large small and fat palms, all held out for my glorious squares of sugar.
Slowly I began, dipping into my jar and dropping a sweet in each one. Some of the girls could not wait and I watched with watering mouth as the delights vanished, each  sweet almost too small to chew. Round the chairs I went, pausing in front of Sister Edith, staring at her clasped hands then raising my eyes to her face, her lips in a tight moue  that could have been interpreted as distaste or disapproval. I remained rooted to the spot until with a 'tut' and slight shake of her wimpled head she indicated that I should move on.

Round I went, and round again, filling single large palms and cupped smaller ones until the jar was empty. I sat down and replaced the lid, realization hitting me. I opened my mouth to speak, to protest, to plead, but Sister Edith spoke first.

'Well, Molly! Jesus truly loves you. You have made your friends happy with your selfless act. Say thank you children.'

I swallowed the wail that rose in my throat and fought the tears that threatened to spill over-saving them for the comfort of my pillow later. As I watched the girls tucking into their spoils I thought that something was not right. If I had done such a good thing, why wasn't I feeling good about it? Why did I want to fight them all to quench my mouth of it's desire for those sweet sugary sensations?
Was I a bad person?

The lesson is this: It is very good to share, but do not give all your Dolly Mixtures away-unless you are a Saint or have an unlimited supply, or you hate Dolly Mixtures anyway.
Posted by Moannie at 03:46