I decided to re-publish a post that made you laugh once...giving me time to shake off the lethargy bought on by radiotherapy.


It happened a few days ago and at first I was so agitated that I said nothing, knowing that if I started on him I might do major damage, and spousal abuse is frowned upon.

Milou has slept under my bed since he was a puppy, when he was less weighty and could jump up to and from the bed easily. He would spend an hour or so snuggled up to me and then, irritated with my restlessness would jump down and crawl under. At first he did not have to duck his head or bend his legs even though there was only eight inches of clearance from the floor to the solid oak frame. But as he has grown older he is obliged to duck and slither underneath and JP, for whom Milou is, well 'special' on a par with the French Rugby team, ripe Camembert, and Napoleon and well ahead of Moi-has become concerned that it is getting too difficult for him.

JP. 'e 'as to do ze limbo to get under zair.
Me. I think it keeps him limber. Limber/limbo-hehe, geddit?
JP. No...I 'ave to do something.

The next day I see him taking some bricks upstairs but it doesn't really register until later. My lovely bed is now on four bricks and I am incandescent.

And this is where I shot myself in the foot.

Me. Anyway, you've made a gigantic booboo because there are four supports underneath that were holding up the centre and are now in mid-air and now I'll break our thirty year old bed that you paid a thousand pounds for and which was supposed to last us till our final breaths.
He went to have a look and came down again with the bricks and I breathed a sigh of relief.

The next day I spent a couple of hours with NOAO son who had taken me to the Supermarket for a big shop. On my return we unpacked and put away the goodies and he made me a cuppa.

JP. I've fixed ze bed.
Me. [wailing] Oh noooooo! What have you done?
JP. [looking very pleased with himself] You won't see any sing. No bricks exposed and Milou will be 'appy.

I rush upstairs and don't know whether to laugh or cry because it's true there is nothing to see because my bloody bed is LEVITATING! 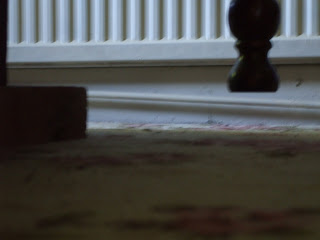 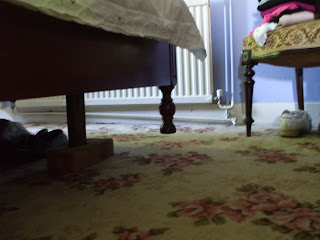 The thing is that now I'm stuck with it. What he did was to crawl underneath and somehow, Lord knows how because the bed is extremely heavy; and  managed to wedge wooden blocks under each of the four middle legs, thus rendering the four outer legs obsolete. I certainly could not remove them. JP refuses to now that Milou can simply walk in and out. NOAO son can hardly walk never mind shimmy under my bed and the only other male candidate is youngest daughter's beau who said that he would not dare undo JP's sterling work.

If you read one day, that an elderly Frenchman, who had led a presumably happy life with his darling wife, is found dead with a Camembert stuffed in his mouth, you will know that I had nothing to do with his demise.

Since writing this the bricks have been removed and Milou now sleeps downstairs.
Posted by Moannie at 08:42