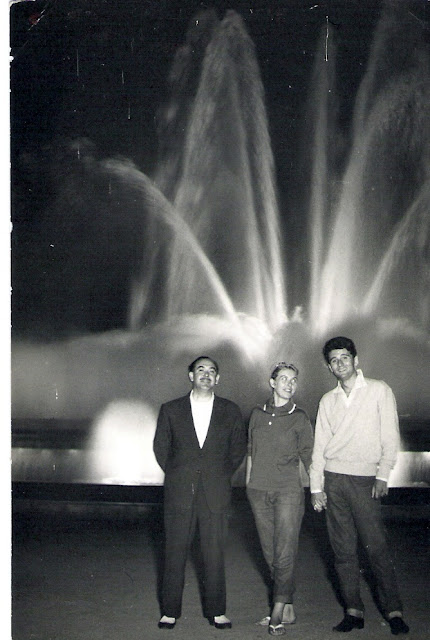 Ah! Look at the love light in her eyes, the jaunty stance of the guy who knows he's cute, and the knowing smile on the face of Senor Gordillo who is in on the joke.
Barcelona, 1957, one of the golden years for me. I was 22 , on holiday in an exotic location abroad, staying with my boyfriend at his lodgings in the apartment of middle aged, spinster sisters Conchita and Laura, neither of whom approved of my presence. The sisters only ever rented rooms to men, students, like JP, or travelling salesmen like Senor Gordillo. I was only tolerated because JP's tenancy was to be long term and his rent provided a good income.


My room was next to JP's and was smaller, his had an anti room where we ate our meals under the watchful eyes of the sisters who observered us from the kitchen at the end of a long corridor and heaven forbid that the door swung closed; Conchita, the head guard dog would bustle along carrying a dish, replenish our plates and prop the door open again.

Incredibly, they appeared oblivious to  the fact that our rooms were connected by a balcony which ran the length of the building-either that or they had put us on our honour, well not I, for at that time I did not speak Spanish and was a very 'good girl' of the fifties - but probably JP, and he would have had no scruples, for, though Catholic, he had lapsed to such a degree that it was only superstition which led him to light candles for the dead and anyway, he always chose his battles well.

On one occasion, when washing out undies, I did JP's as well, and the sisters threw a tantrum which involved much shaking of fists on the part of Conchita and apron throwing over the head of Laura as Conchita shouted that I was taking good money out of their pockets and that they wanted me gone, adding that I was a Scarlet Woman and they knew what we were doing at night. We left them to it and went to the Bullfights, staying out till late in the evening hoping they would have had time to cool down. They were both still up, and docile, even apologetic. Senor Gordillo had told then that their fears were groundless, he was a light sleeper and could vouch for my purity. He could of course, because we had been very good.

But then we weren't.

Hence the smug expression on Senor Gordillo's face.
Posted by Moannie at 02:29

Email ThisBlogThis!Share to TwitterShare to FacebookShare to Pinterest
Labels: Barcelona, scruples., the fifties