I'm not a gardener. I think I am a Garden Enabler. I only know the common names of plants, some plants, and even that is a hit or miss fact. I once had an acquaintance for whom a Rubber Plant was a  ficus, as in 'My Ficus Elastica 'Decora'  is giving me cause for concern, or 'My Antirrhinums are taking over the border' or, 'My new borders will be a mix of Phacelia Campanuloria, Gypsophilia elegans and Godetias.'  [Thanks to: The Complete Guide to Successful Gardening: Published by Samson and Low 1978]  She was a gardening snob and I never liked her, but let's not speak ill of the long departed.

The basic layout of my gardens,three small interlocking spaces, was laid out before we arrived, all I have done is introduce lots of  compost, bulbs of all shapes and sizes buried in any earth that gave way to my trowel, and planted three trees. I'm a sucker for any sad looking plant on sale that I bring home and nurse with medicine and hope. I seldom weed unless the plant stings, stinks or doesn't even have a flower to recommend it. Three years ago I planted a large bulb that was in a mixed bag of bulbs bought at a garden sale; it was too big to be a daff. or tulip. I planted it deep into a large pot with three Geraniums. The flowers grew and bloomed two years in a row but the bulb lay forgotten. 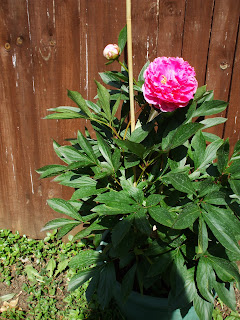 [All these pictures enlarge beautifully with a click]
Then last year a small bush grew out of the bulb, flourished and died down. This year it grew again, produced two buds which burst into glorious blossom and announced themselves as Peonies. 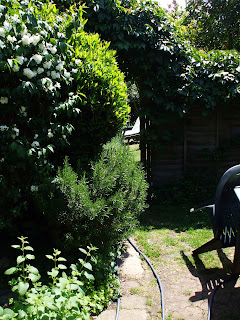 I try very hard to restrain JP's use of secateurs and shears because I love the way that nature finds it's place, and the wonderful play of light on the different shades of green upon green. The plant with white flowers is, I think, a false orange. Pretty flowers but they do smell rather like an incontinent cat. 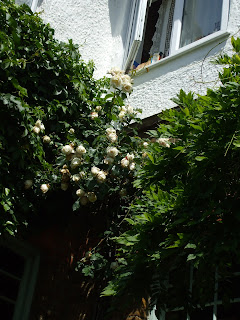 Seventeen years ago this rose bush was a spindly thing; couldn't make up it's mind to live or die. We left it alone and now it is knocking on the study window. 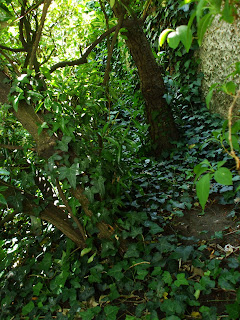 Even tiny gardens have secret spaces if you look hard enough. This ivy covered spot is behind the Lilacs and the pear tree. 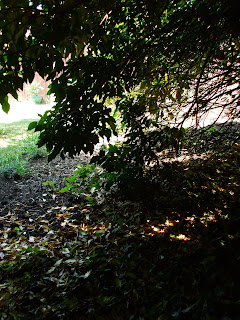 And this space is under the massive Elderberry tree. No longer simply a bush it has provided me with enough flowers to make a dozen bottles of cordial: delicious. 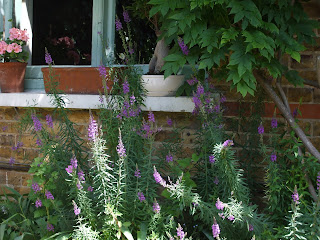 I have no idea what this blue flower is. Last year there was just one and this year it has seeded the entire border. Love it. Enabling, see? 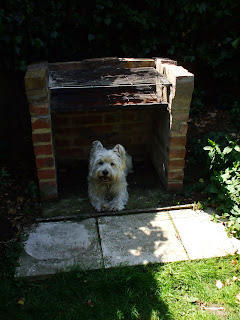 And of course, a cool spot for Monsieur Milou.
Have a lovely summer.
Posted by Moannie at 08:11

Email ThisBlogThis!Share to TwitterShare to FacebookShare to Pinterest
Labels: gardening with love but no expertise