YOU ARE MOST WELCOME, FRANCIS, ALBERT.

Mister London Street is a natural born writer. His work seems effortless, his caricatures as sharp as razor-blades and his insights illuminate the human condition. No-one can take the mundane and turn it into magic the way he does. I tell you this as a preamble to this next post because, although I have given up aspiring to his degree of perfection, he does often inspire me with a subject, and this one was dislodged from my porridge of a brain by Absent minded a post about  his recurring Daydreams.

As a child, a young child my recurring daydream centered around the house of Rupert Bear [the only books to which I had access] His house was my house. I warmed myself at his hearth, ate at his table with my mother, my brother and a new father. And my father had a 'bear' look about him. His hair was the colour of Rupert's fur and he had a soft beard of the same hue. He was big, cuddly, bear like and I would sit on his knee sometimes. We would have Rupert Bear type adventures and at night he would read me to sleep.  These daydreams stopped when mother met Harry.

The next, and last recurring daydream began shortly after we bought The Meadow of Pears [I have given the English translation because I STILL cannot find the accent aigu] our Lavender Farm in the Alpes des Haut  Provence. A large rambling Mas of pale stone  set on a promontory 11km from Sisteron. 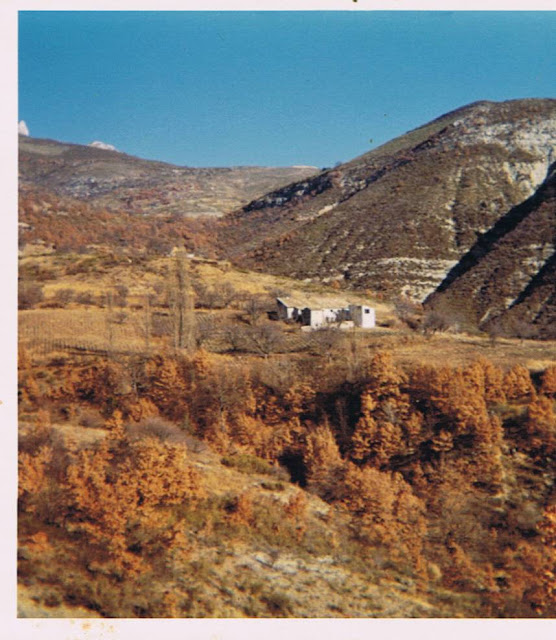 It was 1972 and this was taken as our car rounded the corner and I got my first glimpse of our new holiday home with it's eleven hectares of ancient Lavender. For twelve years we spent every holiday - Easter, Christmas and the long summer break here in this lovely setting. It is isolated from the  tiny village way above us, a few houses, nothing special-a  goatherd who ran his  flock over our land, farm workers, one holiday home; perhaps three vehicles a day going up or down.

Francis Albert had retired...and I missed him. I was more than a fan, short for fanatic...I did not want to be Mrs. Sinatra, had no fantasies that we would meet and that he would fall in love and whisk me away from my beloved JP, I wanted to be the one he would call when he was down; that was my original daydream. Then, lounging in the courtyard with the doors to the house open and his music pouring out on the rare occasions that I was alone-they expanded. We met accidently.[I never could work out how] He was not well and was very unhappy. We invited him to the farm should he need a bolt hole. The unfinished upper half of the building which we had always meant to turn into a suite-was made over for him and one day he arrived, no fanfare, no entourage, just him in a hire car. Sometimes I imagined that he wanted to be alone and I prepared meals for him and took them to his room-or that he came to our table and ate my food with gusto. I daydreamed that we would talk for hours, about family, regrets, gossip sometimes. Then he would leave as easily as he had arrived .
These daydreams came, just once in while, each one more elaborate, down to the ingredients of each meal, the contents of each conversation. Sometimes it was just a phone call to say 'hello, how are you', or a card for a celebration. We were his big secret and he was ours..

They daydreams stopped when he married again and he was happy.

We saw him once, much later at The Royal Albert Hall. Number one and only son bought tickets for us to see the Show with Sammy Davis and Liza Minneli. They opened the show and were both brilliant but when Francis Albert's figure entered I stood up, cheering and whooping 'I love you Frankie' and did not care that he was two millimetres high [this was before big screens] It was enough that I was in the same room with him.


Now I don't daydream about what might have been, I reminisce.
Posted by Moannie at 08:47