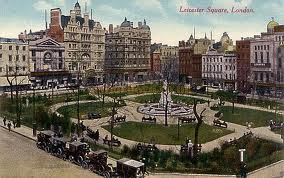 The other day, as we were finishing our lunch, he looked up and asked me 'Do you remember where we were when we had our first argument?'

I was instantly transported back to a Sunday afternoon in1955 and Leicester Square, London. I felt my flesh taut on my bones, brushed my hands through my Hiltone blonded Doris Day DA and warmed to the September sun on my face. The bench is warm too where we are sitting as we wait for the afternoon showing of a film we both wanted to see and heard the voices  and the light Sunday traffic as a distant hum.

We've been 'going out' for a few months; though it really added up to perhaps less than fifteen of my days off from the Hospital.  By the time I had paid for essentials there was little left of my salary for trips home and I seemed to be forever trapped in debt-by the time I had repaid the Paper man for the cigarettes he 'put on tick' for me and the odd half-crown borrowed from someone to replace the holey black nylons I managed to get through as if they were made of cobwebs- I usually only had enough for one trip to Dreamland Ballroom and the first packet of cigs.

I cannot remember if we had three separate trips to London together, or if the 'argument' occurred on the same day that we had to run from Soho, all the way down Regent Street looking for a loo, with me in agony, bursting my bladder; not a romantic scenario at the time. Or was it also the day that we ate at a Chinese restaurant in Soho where I caught the Dysentery that would see me interred in a Hospital for infectious diseases for three months? [The restaurant was closed by the Health authorities shortly after our visit]

Kimo sabe, as we say in this house [this was either a phrase used by the Lone Rangers companion, or the actual name of the Lone Rangers companion] What it means chez nous is 'who can say?'
The argument began as a gentle discussion of fruit,of peaches, which were only just becoming available in Britain as our economy expanded. JP was saying how plentiful they were in the south of France. I said that I loved plums, the large dark juicy Victoria, and pointed out a couple seated next to us who were sharing a bag of them.

'Oh, you mean, Prunes!'
'No, prunes are dried plums.'
'Non, they are pruneaux '
'I think you mean prunus which is the generic term for plums, damsons, greengages etc.,'
'Eh?'

I tend to forget that his English is pretty basic; when we first got together he had: yes and no, I'm hungry and, I love you.

'What do you call those round sweet greeny yellow fruits?' I asked.
'Rene Claude.'
'Well we call it a Greengage and it too is a member of the family Prunus.'
'No, a pruneau is what you call a plum and what we call a PRUNE!'

Now I'm getting a bit het up. I stand up and I'm afraid I took a stance, very Calamity Jane with hands on hips.

'Well, here in ENGLAND a prune is a dried up wrinkled PLUM.'
'And in FRANCE it is a PRUNEAU!'

I can't believe we are shouting, or why. He is standing now and facing me, mouth tight and eyes blazing. I walk away from him to the edge of the square and look back and see that he is walking in the other direction. I slow down and walk around the edge of the square tears falling as my anger dissipates. He has the train tickets and the money for the cinema. I hate him, arrogant French boy.  Head down I bump into him.

'Prune,' he says.
'Plums' say I.
And he holds me and kisses me and all is well with the world.

SO HAPPY TO BE BACK

I don't think anyone has missed me, and that is a bit, well, sad really. I know I am not that prolific but it has been 20 days since my last post I had thought to see  at least one or two...'Moannie where are you' [s].

The saga began when I finally got truly mad at Hayhohell and cancelled my contract with them, and, at the same time cancelled   BT who have done nothing wrong, but we decided to put all our eggs into the basket at Sky, thus saving a bundle [eventually, we hope] This all happened on the 1st of this month and I, in my blissful ignorance believed it would all be fixed and finished by the eighth.
Hayhohell however lived up to its name and reputation and refused to give me my mac code so that Sky  has made me wait till the 18th to do whatever magic they had to do to get me connected. The parcel arrived with all the bits and pieces I needed to get it done but...and there's the rub, I didn't have the nerve. Today the wonderful Debs and Gary came by and he fixed it for me and now I am back and it is as if I had never been away.

Well it is for you 'cos you didn't miss me.

Twenty days of twitching, of irritability; of dusting and weeding, cleaning in corners that have not seen a duster since we moved here seventeen years ago.I have walked and wormed and weeded until dog and garden have yelled 'uncle'.  I've begun baking, even using yeast  to great effect [pizza dough] and disaster [Chelsea Buns] and brought out my Encyclopaedia Gastronomic  to produce some great meals much to the approbation of JP. I've dillied and dallied and a couple of times lost my way home and the time CREPT BY.

I could have used that time to my advantage, storing up posts in word, but nothing happened when faced with that blank white page; there is something about this small rectangle which gets my creative juices flowing.
Hayhohell still showed me the little place where my emails are stored but it mocked me, creeping up from 6-to-155 and of course I could not access them. It has been awful.

And now that I am back, in touch with the world and my friends and I can ask Google questions [I have a list]   it feels good.
Don't let me down Sky, you have my on-line life in your hands.