A PIECE OF CAKE!

I have just written a rather fine piece, funny and articulate of course, all about my run in with nerves over the prospect of Radiotherapy. I described how I linked that fear to the five-year little girl who was having treatment for Ringworm with what she had been told was an 'electric needle' and realised that the little girl must have been terrified and for all my antipathy to psycobabble and my belief that you should 'suck it up and get on with it' I took away with me from a counsellor at the Hospice some coping skills and decided that I would take that little girl into the room with me and keep her calm.

I just got to that point when a box came up offering me some edit or other. I pressed no and lost the whole thing.

I now only have one more session to go and I'm done with treatments...one more CT scan and one more visit to the Consultant and life can slowly get back to normal.

My fears?? Well I was so nervous I forgot all about the little girl and concentrated all my efforts on not throwing up.Ten minutes of placing my head in the right position and taking measurements and five minutes or less of the ray gun.A piece of cake. The worst thing about the whole deal was the discomfort of lying dead still on the uncomfortable metal table and the ripping off of the tape which was holding my head in place. I've had some headaches...but they could just as well be caused by the tightness of every muscle in my body when the machine starts its job. And the fact that it is every day but, as I have learned some folks have six weekly sessions and I have just had five days...I have been very lucky...so has the little five year old girl. 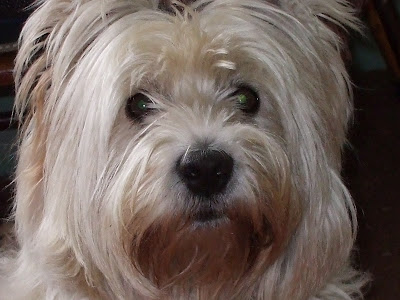 BECAUSE I CAN. BECAUSE HE IS THE CUTEST THING, BECAUSE HE KNOWS I'M NOT QUITE AS I WAS AND HE LOVES ME MORE THAN EVER; EXCEPT, THAT IS WHEN ANY OF THE CHILDREN COME A CALLING, THAT 'S WHEN HIS DEVOTION TO ME TAKES A HIKE.

HE WILL BE NINE IN OCTOBER MAKING HIM  IN HIS MID-SIXTIES IN DOGGY YEARS, FINGERS CROSSED HE IS IN GOOD HEALTH..

HOPE YOU ENJOYED THIS LITTLE ASIDE. I'M SURE I SHALL BE BACK IN THE OLD GROOVE SOON. DID I TELL YOU I'M HAVING RADIOTHERAPY SOON? THERE, DIDN'T TAKE LONG DID IT?
Posted by Moannie at 10:19 16 comments: