Since the advent of The Flecker I've changed. To be expected most of you will say...be odd if you hadn't.You must be apprehensive, angry, frustrated at your lack of control over the day to day running of your household...irritated by the restrictions the symptoms place upon you..and yes, a little bit of all of that comes into it but the biggest change is in my attitude to the world around me.
I just don't care who is running the Rovers Return or the Queen Vic. It means naught to me if  Dr. Who regenerates without me or if the Daleks take over the world. I have no interest in knowing which of the three Stoogies have put their foot in their mouths and lied to us again on National telly, nor do I care who wins
the US presidency, who is the chef du jour, who escaped the Jungle, skated their socks off, won any one of Cowell's tacky shows or became a multi-millionaire over night. I cannot read further than the first lines of any book or newspaper before losing interest and spend a good deal of time staring off into space while listening to Radio Four...the only medium that does not bore me to tears.
The wide circle I do care about encompasses half the world includes the family of course and old friends and my blogging mates.
As for the rest it's still all about me.
Posted by Moannie at 02:51 23 comments:

It's been a bit rough and Saz has kept you up to date so no point in re-hashing.

Suffice it to say I am once again attached to the Net, and I will never turn my computer off again, ever. NOAOS has fixed it so that Paco 'hibernates' who'd of thunk it? Oh and MLS, I didn't do it and don't know how to undo it, but for you and all of us who hate veri...it will get fixed.


I hate how I feel...just...not well. Tired, of course  and a little bit icky and a little bit this and a little bit that; and the cellulitus in my arm, caused, unbelievably by the rubbing of the plastic name tab at the Hospice of all places, means I must try to sleep with my arm elevated and the cashmere scarf tied to the bedpost precisely for that purpose raised a few eyebrows.


My hair is growing in, curly, and the fact that it is also snowy white is making me look more bald than ever. Rather like a bald eagle.

And now a picture to make you smile, circa 1972 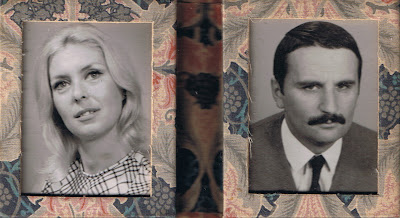 Email ThisBlogThis!Share to TwitterShare to FacebookShare to Pinterest
Labels: this and that

Because of my tiny deep veins I am left with massive bruises each time a Vampire comes to take blood, it was decided that I should have a PIC line installed...a permanent line inserted beneath the skin from an arm along the Brachial into or near the heart. This was to be done two days before Chemo. So, last Wednesday NOAOs took me over to the hospital for what should have been a quick routine job. Turned out to be another four hours before we left and as I was washed out went straight home.

On Friday I noticed that my left hand was swollen [the side where the PIC line had been inserted] and my heart sank and with good reason; what should have been at the most, a three hour stay ended up to be six and a half plus some bad news.

By the time I was first seen, doctors consulted,  scans decided, waiting times counted, scan completed, colleagues consulted and decisions made and finally passed on to me, and two hours had past. Seems that the Line was in three centimetres too far, that I now had a blood clot or two and...icing on the cake kiddos...would have to inject myself into my abdomen once every evening for...whistles bell and drum roll here please:

THE NEXT SIX MONTHS


You couldn't make it up, could you.

By the time the chemotherapy had run in and we were finally home and was still murmuring 'six months, I should live that long.'

But then I thought...strike three...you are out kiddo. But NOAOS son said
'What if all this time you are not that strikee, but the cat with nine lives? Still got 6 for the feckers to feck up.

Email ThisBlogThis!Share to TwitterShare to FacebookShare to Pinterest
Labels: the next six months, Vampires

IF I HAD SAID TO YOU TWENTY, THIRTY YEARS THAT IF YOU GAVE ME A SET SUM OF MONEY TO INVEST FOR YOU, THAT PROMISED A SET SUM FOR YOUR PENSION...ON PAPER AND SIGNED MY NAME OR  THE NAME OF MY FIRM, TO THAT PROMISE. AND IF I TOOK YOUR MONEY AND SPREAD IT AROUND RISKING IT IN  WAYS NOT AGREED UPON IN OUR ORIGINAL TALKS. AND THEN ONE DAY THE NEWSPAPERS RAN WITH THE HEADLINE THAT MILLIONS WILL BE AFFECTED AS MORE FUNDS FAIL.


WOULD YOU NOT BE BLOODY ANGRY WITH ME?
WOULDN'T YOU DEMAND TO KNOW WHERE THE MONEY HAS GONE?
AND WHO HAS BEEN FIRED?
AND WHY I...NOW CEO AM STILL PAID MILLIONS?


I am not actually terribly political...and as JP swore that his father never used insurers etc and look at him, we never ever insured ourselves...cars, houses yes, businesses, yes but endowments, pensions nope, we had savings and they were safe, weren't they? Well until we had the 0.1/2 interest rate we were.

But l confess to blood red rage when l read of more ordinary, hard-working, salt of the earth, pay up and shut up folk losing their money and even having to delay their retirement.

HAS ANYONE BEEN JAILED?
HOW CAN THIS BE RIGHT?
Posted by Moannie at 03:29 20 comments: