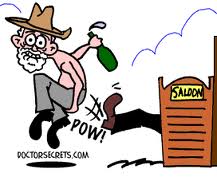 It has been pretty much the status quo here. Sleep on and off, bathe, dress, laze around until I can get back into bed without looking like too much of a wuss [slang: weakling]  Thing is, that although the Chemotherapy knocks backs the fecker it makes me so lack energy that the slightest effort costs, then when the Chemotherapy. is over for another ten  days I get more energy yet breathing is difficult. So you can imagine I was not best pleased to find that the fecker...indirectly, I cannot lay the blame totally at it's door, decided that I could take more and racked what goes for brains eventually coming up with...

Laugh at your peril:

I am going to leave you with this image...why should I suffer alone?
Posted by Moannie at 02:38 19 comments:

Yesterday I spent the afternoon at our districts' Hospice. Not something I ever imagined doing for myself, nor someting I have ever done for another.  The word has always chilled me, and it should not have done because it's derivative:-

noun
1.
a house of shelter or rest for pilgrims, strangers, etc.,especially one kept by a religious order.
2.
Medicine/Medical .
a.
a health-care facility for the terminally ill that    emphasizes pain control and emotional support for the patient and family, typically refraining from taking extraordinary measures to prolong life.
b.
a similar program of care and support for the terminallyill at home.
preaches nothing but love and caring.
I think it is the 'terminally ill' phrase that I don't like, determined as I am to beat this thing...and I have to say that the vast majority of the patients staff and volunteers I met, do seem to have that mind set, many are back after some good years of remission...six and seven years in some cases. However, despite my misgivings I did come away with a feeling of relaxation that I do not feel all the time at home...it is not easy to be on the end of an endless stream of help however willingly given. One knows the sacrifices being made daily by one's loved ones.
In the afternoon after lunch we all sat back on our loungers, like so many oldies...dozed off and I even had a foot massage. Then a Carol service in the Chapel... innocuously non-denominational and rather sweet. I my dears, did not need the hymn sheet. They had this child by seven years.
My driver, Stuart...in is eighties...smoker with a lovely fruity cough, bought me home.
I shall go again next Wednesday and all Wednesdays after that when I'm free, and from what I saw, will enjoy the odd few nights of respite care.
Who knew?
Posted by Moannie at 02:46 18 comments: 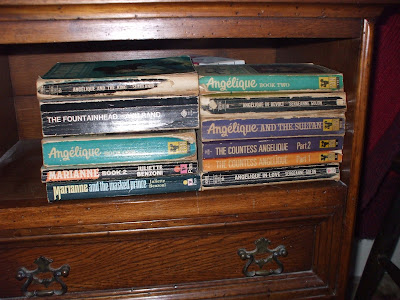 They have travelled with me all my married life; the first things I pack and unpack. Faded now, even yellowed where the sun of France, Spain  and Mexico have burned, they sit where I can see them, unopened for years, just waiting to welcome me back. I have more...hardbacks bought when things were good. Angeliques, Catherines and Marianne s. All beautiful, all tempestuous, mostly green-eyed  with a figure Sophia Loren would be proud of.

I would be the first to admit [since doing my degree and becoming a bit poncey] that these is  no literary merit to these genres of the bodice busting-historical romance-adventures stories [although I have just spotted Ayn Rand...so that's where she went?]. Narrative driven they do exactly what they say on the covers.They tell stonking adventure stories with lots of heaving bosoms, sardonic men, gypsies, pirates and even magic.

Yesterday I picked one up...and now the die is cast. I must to  the beginning go.  Anglelique.. a child, poor and barefoot.  Sigh!

And when the well ran dry in the 70's and no-one was writing that genre any more...I wrote one myself. A two volume masterpiece...Meg and the Rufus Box and Meg and the Blood Red Stones.  Brilliant they are. Stuck on a shelf somewhere, waiting to make my fortune. Almost publishable the man said, at Collins. But kids and life, travel and work got in the way. Well...that's my excuse and I am sticking to it.
Posted by Moannie at 07:01 21 comments:

Email ThisBlogThis!Share to TwitterShare to FacebookShare to Pinterest
Labels: love and adventure. Three Strikes and you're out in that Yankee version of our children's game of Rounders, I believe.
Well, the Flecker has had me down twice, and I'm still here-so, one more and you are down and dusted you hybrid, parasitic, cowardly crawling piece of CRUD.


I'm gussied up like my beloved  Suldog
I'm  swinging my bat or is it arms?)
I'm aiming at your centre
I'm coming to get you
Fleck off.
or
have I mixed my metaphors...
does the pitcher or the batter make the strike?
Who is winning...it or me.
How should this have been written? [it was done at 3.20am]
Help me out Jim...
anyone?
Posted by Moannie at 06:50 16 comments:

Email ThisBlogThis!Share to TwitterShare to FacebookShare to Pinterest
Labels: the striker or the strikee.?, Who wins

Left to Right: Seriously Irish and seriously loyal friend, Beauty Queen, Moi, No-nonsense girl, three baduns, Louisa...best friend from day one: Serious Lesbian who HATED me. Two younguns who had been cadets.
Something happened, or rather did not happen last night  reminding me of an incident that occurred long long ago but one which I've always remembered with a shiver; not for what did happen but for what could have.

I'm young, twenty one but still the oldest of this little group. We've had a month of School and a month of  Ward Mondays and we are still wearing our hated Chip bag hats so are in our first three months. This picture is being posed for an article in the local paper.

Only six months on from this picture and I am on night duty.


Night duty and I don't exactly hit I off. I'm young and in love with life and dancing, and handsome American Airmen who swarm over Margate and Ramsgate...the two towns nearest to Manston Air Base. After my shift is over I am supposed to eat dinner [cooked the night before and warmed up as the day nurses eat their breakfast.] Then I should go to my quarters at the night nurses house...tuck myself up and sleep until it is time to get ready for another shift.   Cannot be done. I toss and turn, and eventually I get up,and dress and creep away to my friends..to coffee bars or just to walk along the beach.
I do this for at least three nights and by the fourth night usually just about make it into my bed the next morning.

This particular night I'm not too well...beginnings of a cold, or just a tummy ache but, as I am on a convalescent ward set in a Quonset hut outside the hospital  I have no qualms in settling down on two chairs with my apron crossed in front, shoes off, hat off...and eyes closed. I have done bottle round, night sister has done the meds, men are tucked up save for a couple going home the next day and are playing cards...and smoking. [truly ash trays sit on every bedside locker]


When I awake it is to door banging and pealing telephone bells. I cannot move 'nurse's paralysis' has struck me down; a phenomenon I have heard about almost as a myth...I know no-one to whom this has  happened.

Then Sister Redmond is there, shouting at me...I still cannot move..she shakes me and actually slaps me...I remember her father is in the ward, a late admission just before I arrived. She is beside herself with anger..he has pulled out his catheter and is in pain.   Now I can move.

I am sent off duty...the shame is immense.

Matron kept me waiting to hear my fate...at least three days passed before I was commanded to appear in her office.
I was a good nurse and they didn't grow on trees, no point to sack me.
She did the worst thing ever. Beside her desk was a large sack and in that sack there must have been two hundred Terry Towelling nappies [diapers] all needing hemming. And I HATED sewing. How did she find out? I did them all, slowly but surely and actually got quite good, taking a pride in the neatness of my work.

A moral there somewhere chaps and chapesses.